How to Make Cheese?

Before we try to surprise you, to entertain you with our delicious cheese boxes, we thought it inconceivable to start our British blog without answering this basic question : how is cheese prepared ?

We’ll try to sum-up the major steps of fabrication in this article, illustrated with the wonderful photo-reportage by Denis Balibouse, photographer at Reuters, who spent a whole season in the Murith family’s farm in the region of Gruyeres, West of Switzerland.

From mid-May to mid-October, this family produces 200 Alpin Gruyère wheels, in the most traditional way : it is exclusively made of raw milk from its herd’s cows. Each wheel weighs between 25kgs and 40kgs, and are ripened for 6 months minimum. 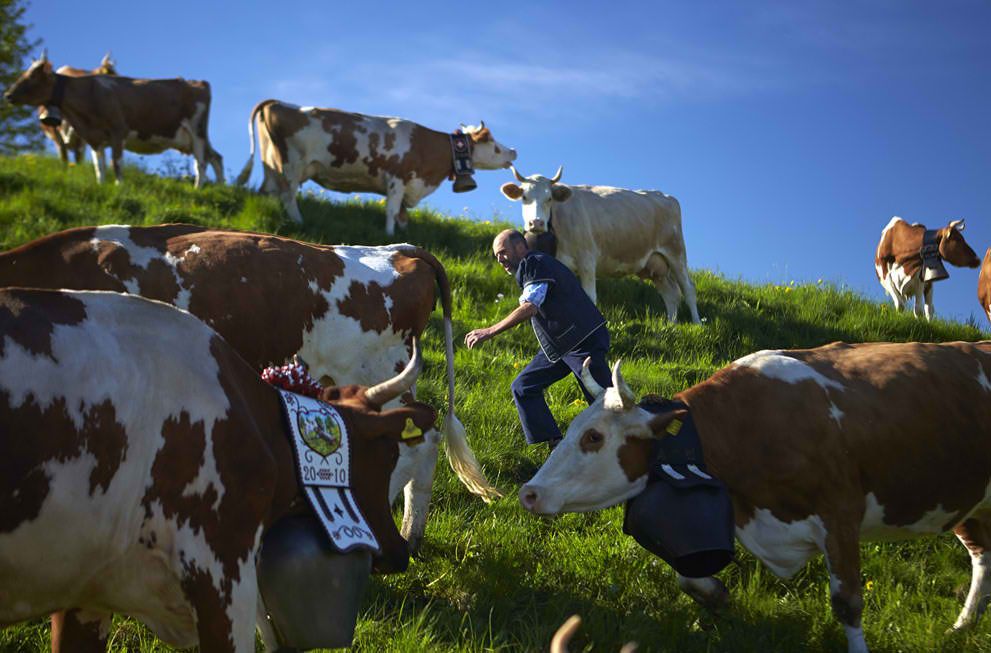 Jacques Murith, farmer and cheese-maker, gathers his cows shortly before departure to Provêta pasturelands, in Gruyères. 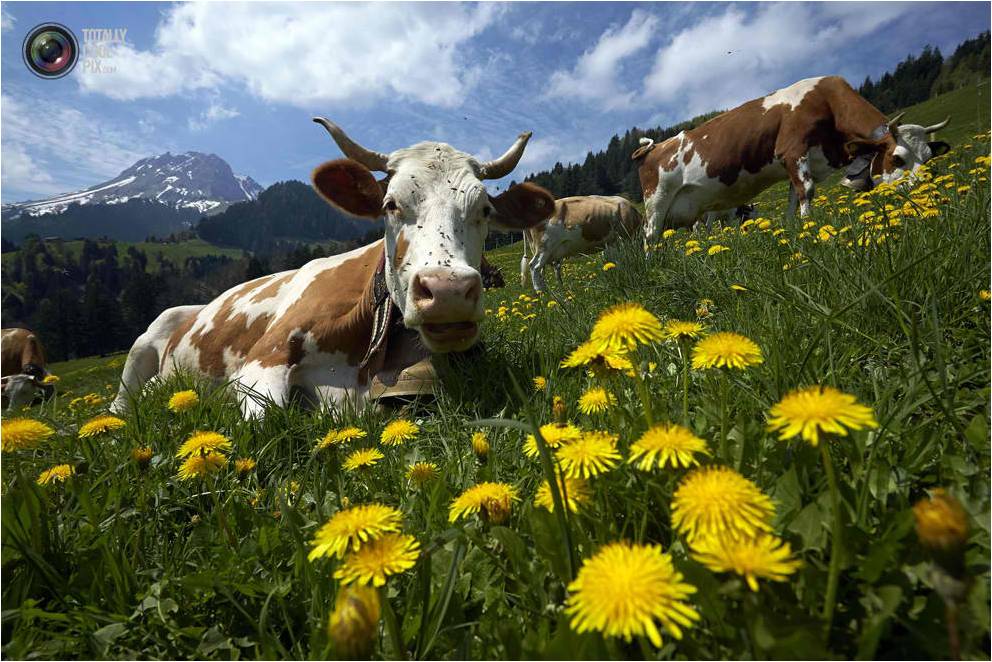 The nature and place of herd’s feeding directly influence the taste, the smell and the nutritional quality of cheeses. Grass is not the same everywhere, and diversified meadows will give the cheese a more intense and varied flavour. 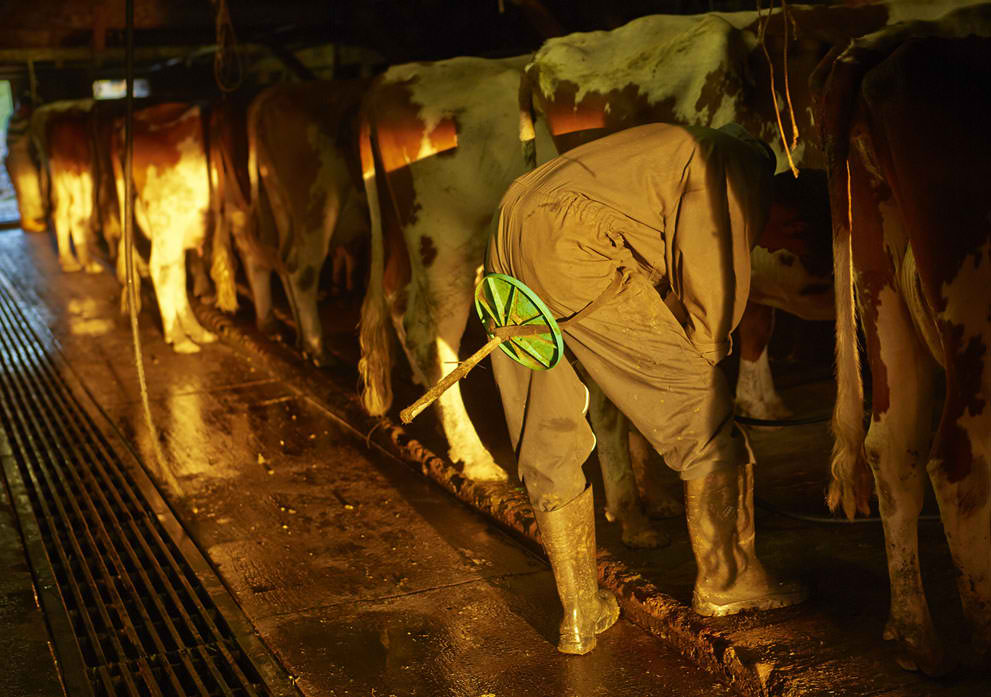 A cow produces milk for about 9 months per year (out of birth period). 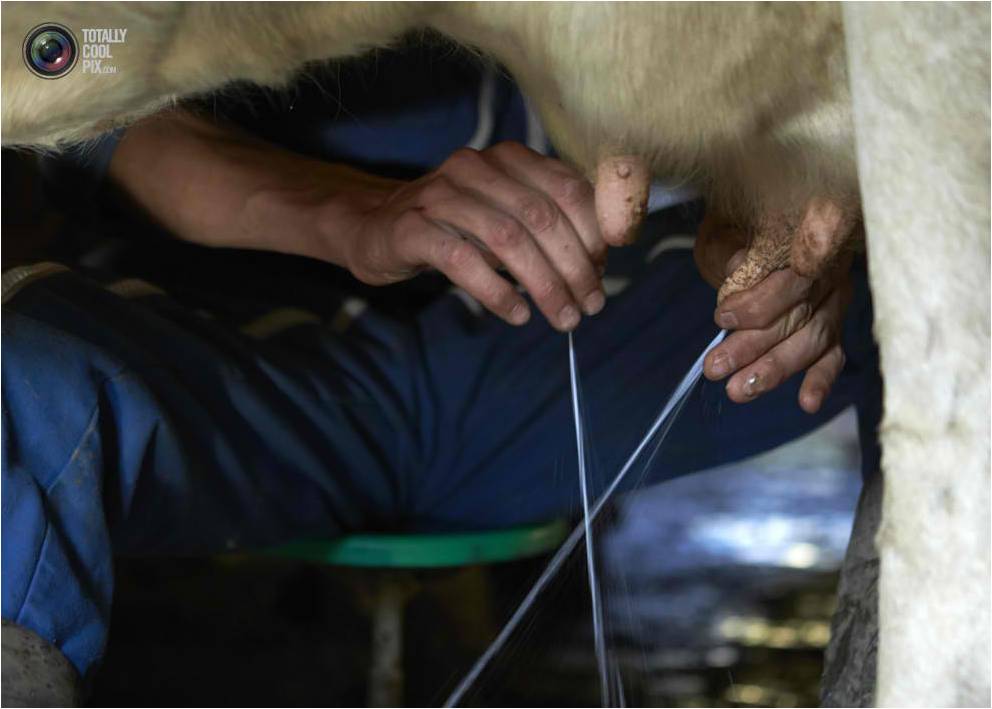 Milking takes place twice a day, and a milk cow produces an average of 28 litre a day. 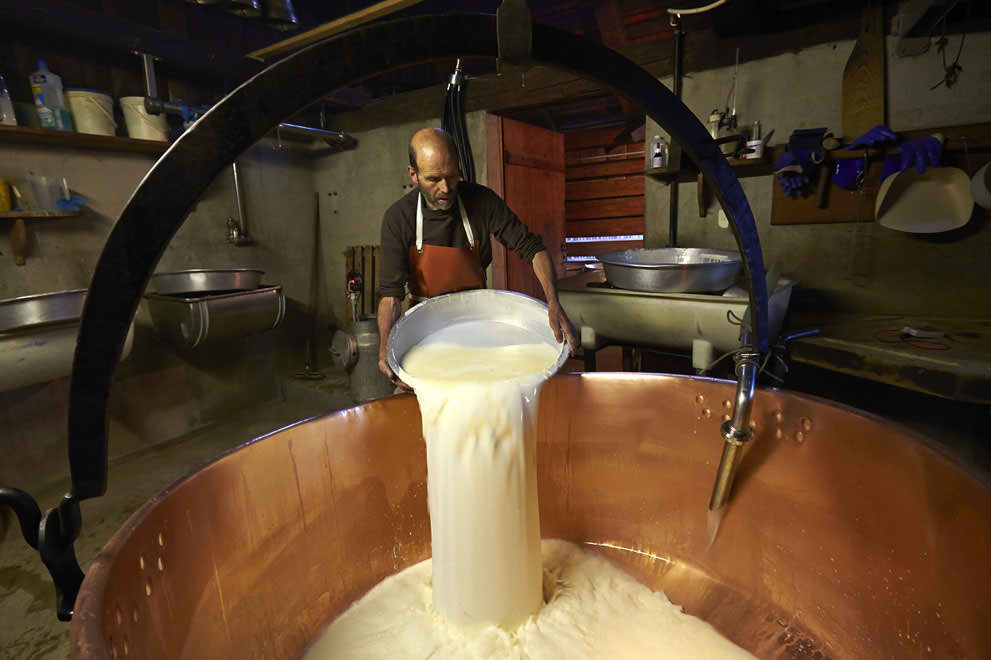 Here, raw milk is poured in a cooper cauldron. The raw milk is a milk that doesn’t go through thermal treatment, except from the immediate refrigeration that comes just after the milking at the farm. It must be used within the 12 hours that follow the milking.

The rennet is an enzyme contained in the gastric juices removed from the calf’s abomasum or the lamb’s stomach, and which causes the milk coagulation. This rennet is often bought outside the farm, but Jacques Murith produces it himself.

This coagulation phase often leads to a change in the milk’s physical state, which moves from semi-solid to curds. Rennet is added in very small amounts : 1 litre of rennet curdles about 10 000 litres of milk at 35°c for 40 min. 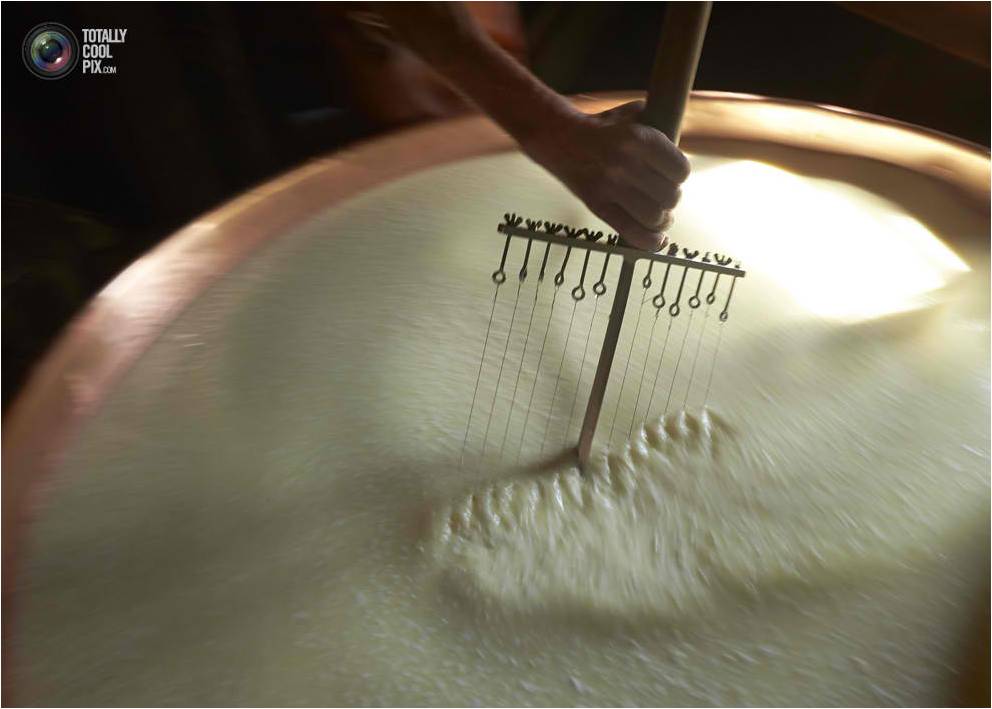 The draining is the phase of cutting the curds. It is used to eliminate a part of the whey hold in the coagulate mass. Cheese is then made from curd grain. Here, Jacques Murith is using a tool to slice the curds in grains.

The mix of curds and whey is heated up for about 40 minutes. During the work, curd grains expel whey and retract slowly, and thus concentrate the noble material of milk (fat, protein, calcium). 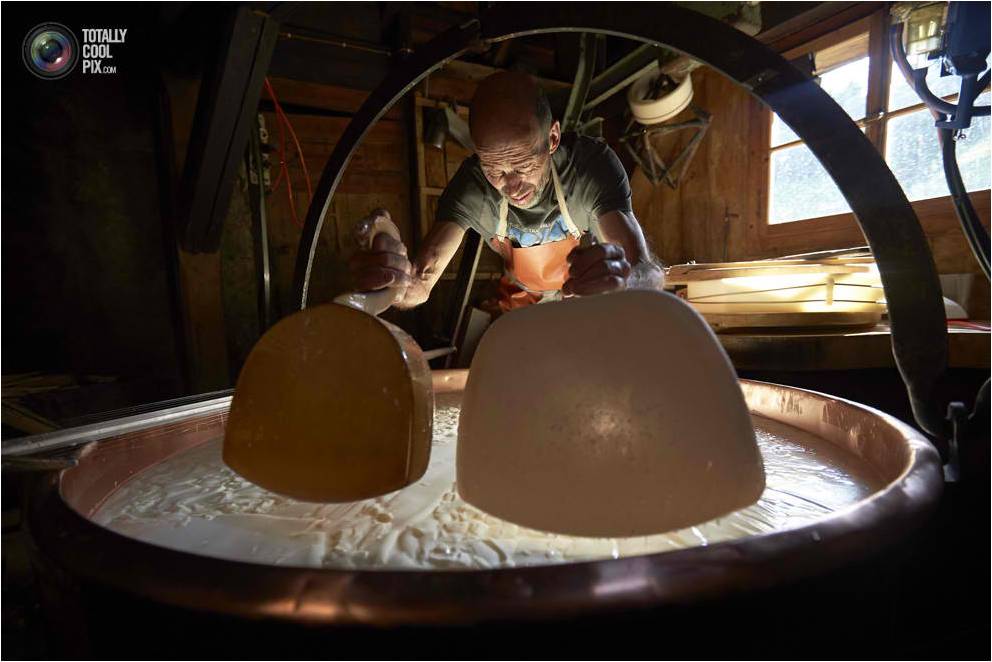 The brewing enables to keep draining and eliminating serum contained in the curd grains. The brewing goes on for about an hour. When the curd grains are thick enough, the cheese is done. About two hours have passed since the renneting. 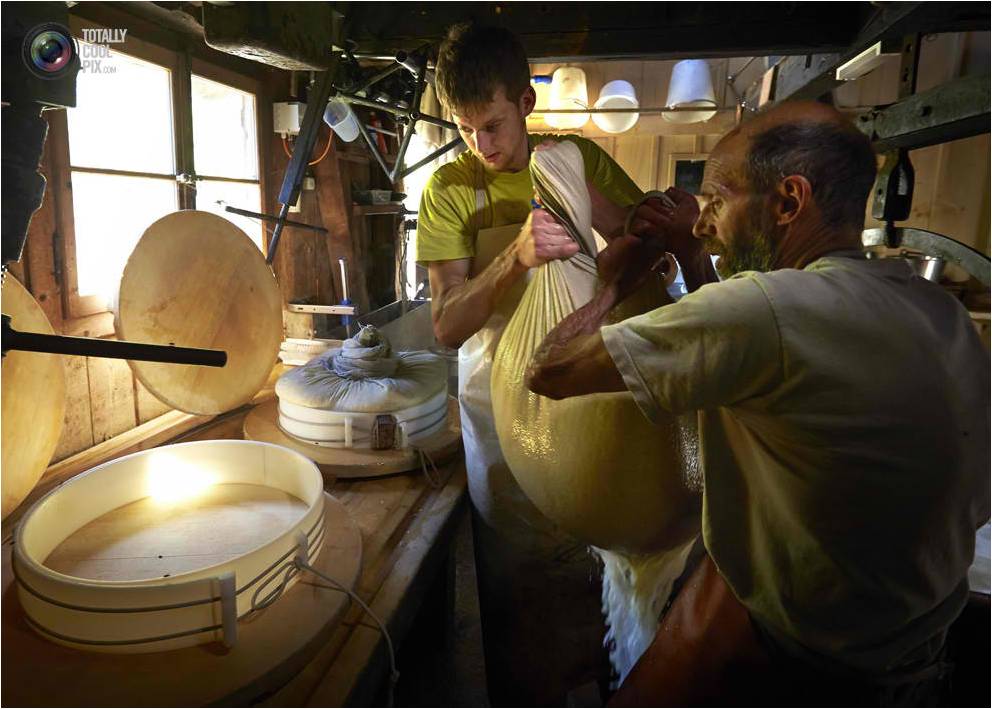 Racking involves getting the curds out of the fabrication vat before putting it in the mould to give the cheese its final shape. 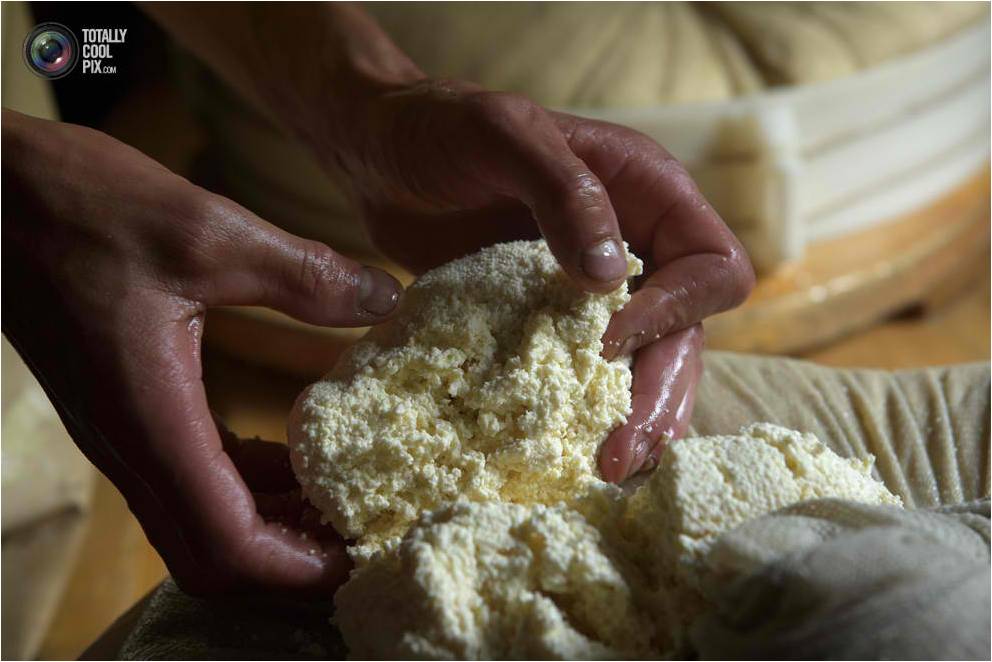 At this stage, the curd is in small grains, it is coherent and must not break. 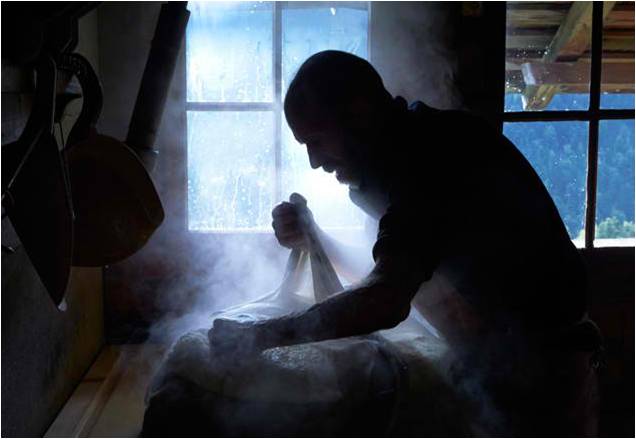 Wheels are then pressed, here by-hand, to stick the grains together, stabilise the cheese shape and complete the draining. The duration and strength of pressing (and the number of potential turning-over) are adapted to each kind of cheese. The pressing can last for a few minutes for wet cheeses and goes on for several hours (16-24h) for dryer cheeses. 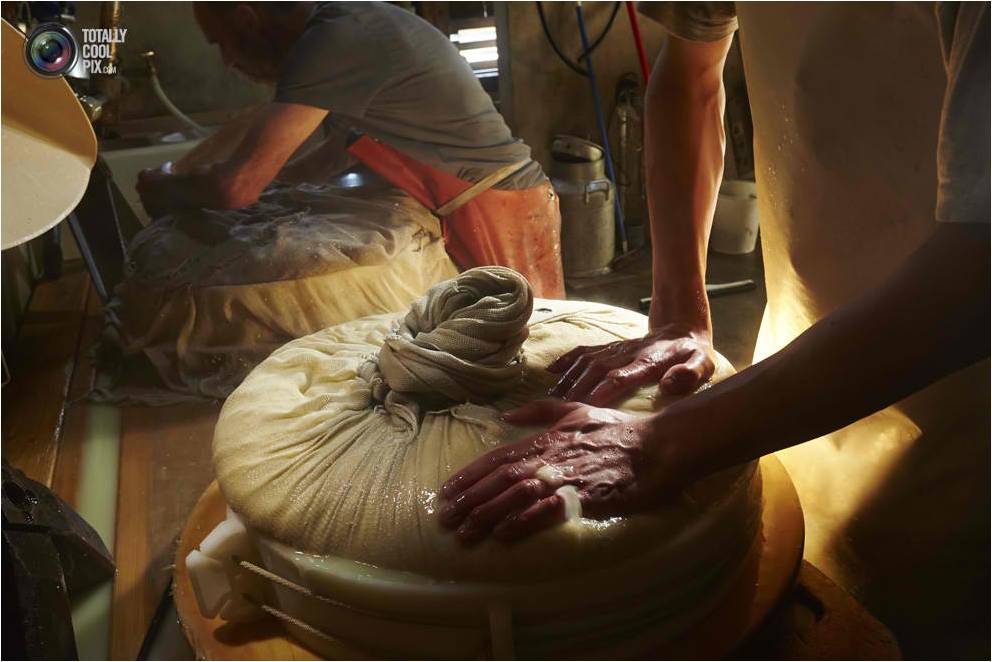 7th step : Removal from the mould

The cheese is then removed from the mould and salted (with dry salt or liquid brine). The salting enables the shaping of the rind by creating a zone high in salt and low in water content, and marks the beginning of the ripening.

Each wheel is marked. This process guarantees the origin of the cheese : it is a Gruyère Alpage. 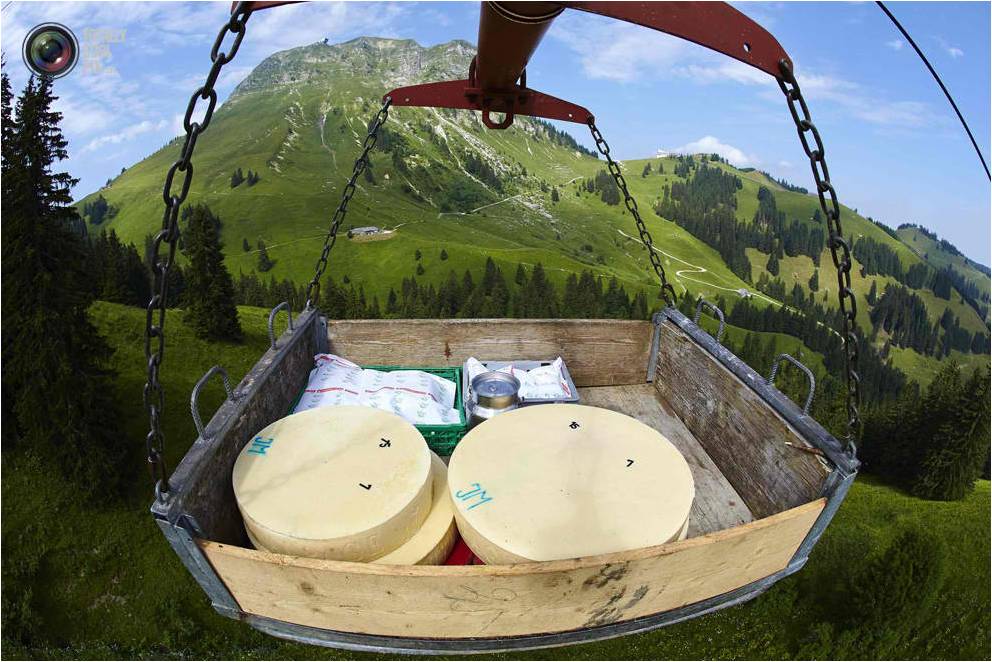 The wheels are sent to a ripening cellar, where they will be regularly rubbed and turned over. 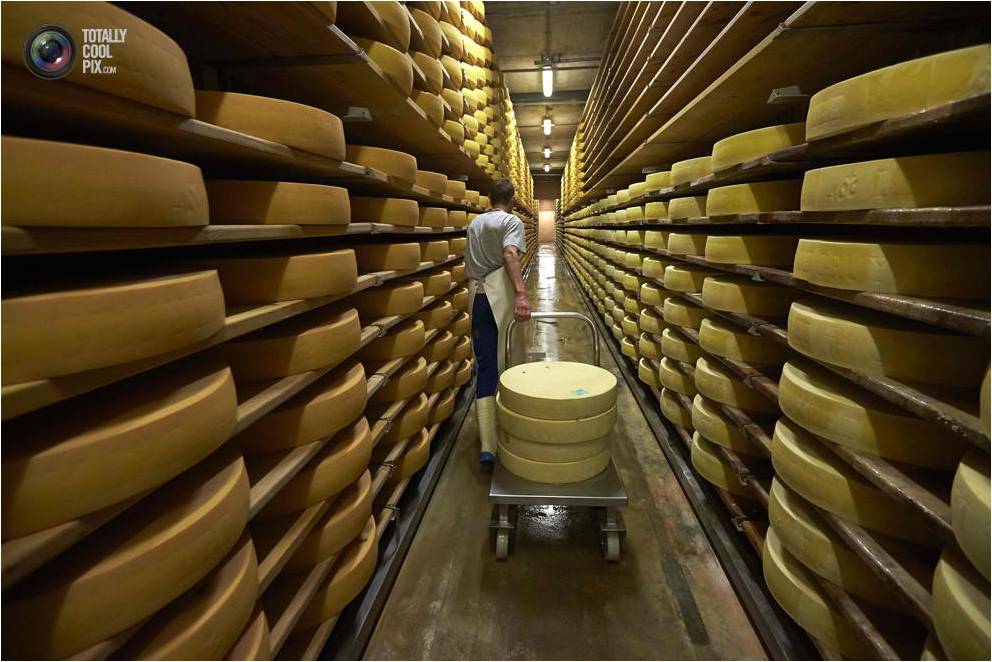 The ripening cellars may be either natural or equipped with tools for temperature regulation and hygrometry. Three factors must be rigorously watched during the ripening : humidity, temperature and ventilation.

The duration of ripening, 6 months in the case of Murith family’s Gruyères d’alpage, is very variable, depending on cheeses. For example, some parmesans may ripened for about four years.

Cheeses are now ready to savour. Who should you thank ?